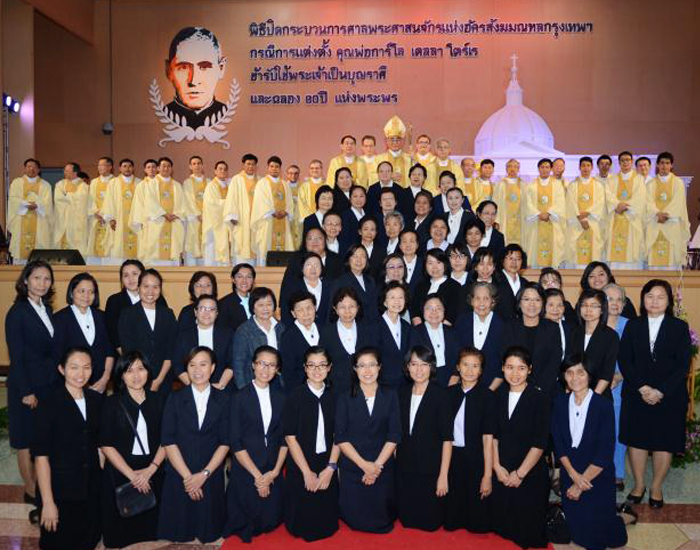 The closing session was attended by members of the diocesan Tribunal (delegated judge, promoter of justice, notary); the postulator general, Fr Pierluigi Cameroni, SDB; the vice-postulator, Fr Joseph Banchong Santisukniran, SDB; the Daughters of the Queenship of Mary Immaculate, with their Superior Maria Kesorn Chaikaew; the Sisters of the Queenship of Mary Immaculate, with their superior Sr. Malinee Chantavarodom; many Salesians and members of the Salesian Family, led by the Provincial, Fr Paul Praesert; several diocesan priests and members of religious congregations and institutions. Of special interest was the presence of nine fellow-citizens of Fr Carlo della Torre, from Cernusco sul Naviglio (Milan), where the Servant of God was born. Among them were several nephews and nieces and grandnephews and grandnieces of Fr. Carlo.

In the afternoon there was a celebration for the 60th anniversary of the founding of the Institute with interviews and performances by students and aspirants. Subsequently Archbishop Kriengsak presided over a solemn Eucharistic celebration.

The Servant of God Fr Carlo Della Torre was born in Cernusco in the province of Milan on 9 July 1900. He completed his secondary studies in the Cardinal Cagliero Salesian Missionary College in Ivrea. He was sent first to China and then to Thailand, where he made his first religious profession at Bang Nok Khuek, the mother house of the Salesian mission in Thailand. In 1954 he founded the Daughters of the Queenship of Mary Immaculate, a religious institute of diocesan right. He suffered greatly on account of this foundation, to the point that he had to leave the Salesian Congregation for thirty years. He died as a Salesian in Bangkok at the age of 82.

Fr Carlo Della Torre is the first servant of God, a missionary, not a martyr, whose cause has been introduced in Thailand.